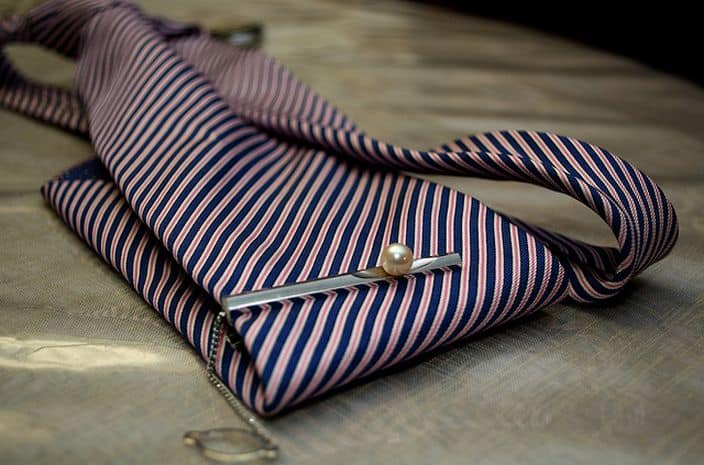 Men used to really know how to dress. From the men of the 50s with their love of hats all the way back to our founding fathers with their powdered wigs, the more masculine gender has, throughout history, often put as much effort into his style as women are known to do today. They were no less manly than men are now for it – if anything, they put the modern-day male to shame – but they did take pride in their appearance.

Fortunately, those times seem to be returning with a surge of interest regarding men’s fashion, and more and more guys are seeking out ways to look dapper, even dragging out old, so-called “outdated” items from their predecessors’ bag of tricks. Hence today’s topic…tie bars (otherwise known as tie clips).

Let’s have a look at how to wear a tie clip like a real man of taste.

First, What Exactly is a Tie Bar?

Many experts attribute the reemergence of the tie clip to the popularity of TV shows like “Mad Men,” which offer a glimpse into the masculine fashion sense of a bygone era – in fact, in the before-mentioned show, the actors are often seen wearing this specific piece of jewelry.

But tie bars weren’t just created to give men another way to strut their stuff; like most fashion accessories, they were created for a specific purpose.

Remember when you wore your first tie? How much of an obtrusion it was – dangling around, getting lopsided on your shirt, and otherwise just becoming an untidy nuisance draped across your chest? The short end seeming to have a mind of it’s own?

A tie clip, as the name suggests, is designed to solve this problem, fastening the tie to your shirt so that it stays neatly in place and out of our way. Thus leaving you looking crisply put-together throughout the night. Makes sense, right?

And, of course, they eventually evolved to complement the outfit even further on a visual level, creating the versatile accessory that exists today.

How to wear it?

The first concern a newbie has when learning how to wear a tie bar is the one of tie bar placement. In short, where does it go?

Well, that really depends on what else you’re wearing. The general rule is to count down to the fourth button on your dress shirt and place the tie bar there. That said, the rule needs to be adjusted when you’re wearing a jacket.

The reason is that the stance of your jacket (how high your jacket buttons) affects whether the clip will be visible or not. A high-stance jacket often covers up a tie bar placed at the fourth button, and this ruins its use beyond practical function.
In cases like these, feel free to raise the tie bar up to the third button, where it can be seen all its glory. If the jacket has a particularly low stance, on the other hand, drop the clip down a bit.

If you imagine your tie split into three sections, all equal in length, you should be wearing the clip somewhere within the middle section – no matter the stance of your jacket.

From there, just open up the clip and clip the tie to the placket of your shirt, horizontally. Pretty simple.

A Word of Warning on Width

One big mistake a lot of guys make is wearing a tie bar that’s too wide for their tie – this can especially be an issue if you’re into skinny ties. Simply put, it looks goofy.

Rule number one on this note is that the tie bar should never be wider than your tie, and in fact, it really shouldn’t cover more than ¾ of the width. Yes, this means you won’t be able to wear every tie clip with every tie, but so be it.

On Colors and Designs

Gold or silver. Plain metal or colored and decorated. They’ve got tie bars fitted with stones and even “cute” clips in the shape of guns or daggers, among other mind-blogging fashion statements.

Personally, I recommend going the modest route with a tie bar. It’s still a unique-enough accessory these days that it stands out on its own accord, creating an air of sensible modern sophistication. So no need to get fancy.

That said, the final decision, as always, should be based on your own personal style. Some guys have a thing for unique masculine jewelry, and for some guys it really works.

Just experiment a little and see what kind of reaction you get.

Romantic Gifts For Men Who Have Everything

Two Six Feet Under Actors Who’d Like The Show To Come...

How Disneyland’s New Parade Could Hint At Incredibles 2

Is It Ever OK To Wear Brown Shoes With Black Pants?

Understanding The Differences: Sport Coat vs Blazer vs Suit Jacket

Can You Pull Off The Suit Jacket/Sport Coat With Jeans Look?

ABOUT US
FOLLOW US
©
New Style Ideas Delivered To Your Inbox?
Leave your e-mail address and we'll send you new fashion tips and style ideas directly to your inbox.
Your information will never be shared or sold to a 3rd party. You can unsubscribe at any time.