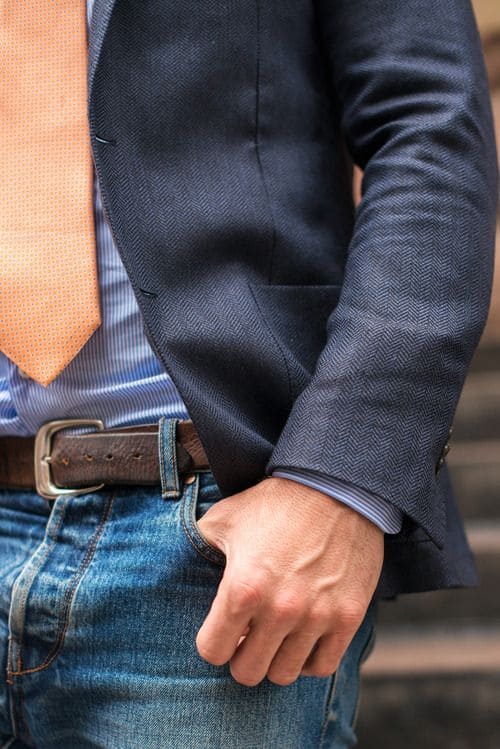 It’s an old argument in fashion circles, with vehement views on both sides – some even go as far as to call it the “business mullet” – but for proponents, there’s nothing better than a sport coat, blazer, or suit jacket with jeans. It’s an easy way to get more mileage out of your gear and look sharp while showing you’re an edgy guy who bends the rules.

Or is it? Are these guys wearing suit jackets or sport coats with jeans really getting away with it, or only fooling themselves?

While this combination can work, it’s highly dependent on a number of contextual factors.

The key to pulling off this look is that you want to dress the jacket down, rather than vice versa. You do want to pick nice denim, but at the end of the day, it’s not really possible to dress denim up past a certain point; denim will always be denim. So it’s important that the coat be very casual.

This is why the blazer or sport coat with jeans is far more successful than attempting something similar with a suit jacket.

A suit jacket is part of a uniform – it’s meant to be combined with a pair of trousers, often designed to go with that jacket specifically. The entire suit functions together, and the jacket alone may look out of place.

On top of that, the suit jacket is much more formal than a sport coat or blazer and has a lot of structure. This makes it more challenging to pass off as casual wear.

The blazer, on the other hand, is a step down in formality and, in the days of old, was more likely to be worn to a nice dinner. They have less structure than a suit jacket but more than than sport coat.

Finally, the sport coat is designed for getting outdoors, originating in a time where men actually wore nice jackets when “sporting” (i.e., running down wild animals).

Due to this casual nature, these are the easiest to wear with denim.

Is it the Right Occasion? 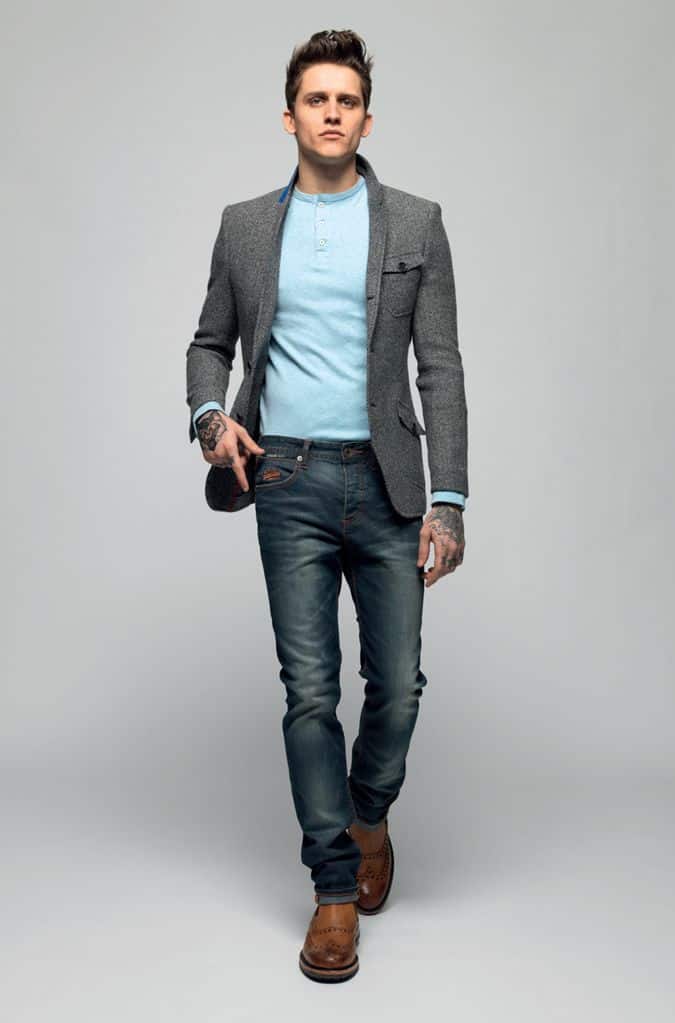 Before venturing into this territory, determine whether casual wear is even acceptable. For an event that calls for a suit, you won’t be perceived as creative by showing up half-prepared.

Remember, this is a case of dressing your jacket down rather than dressing the jeans up. So no matter how you go about it, it will never pass for formal wear.

Causal events with a lot of guys in button-ups and ties are a good choice for this ensemble. With a chance you’ll be overdressed instead of under-dressed, the timing is on the money.

After considering whether it’s an appropriate move, take a hard look at the sport coat or blazer you’re wearing. Does it fit right? Jeans or no jeans, a guy in a jacket that doesn’t fit right looks like a fool.

Also, shoot for informality as much as possible, with very little structure in the shoulders, high armholes, and preferably 2-buttons rather than 3, so it’s more open. Don’t go with peak lapels, do choose notch, and keep them slim if possible.

Great fabrics to consider are tweed, linen, corduroy, and moleskin.

A Reminder About Jeans

The jeans you wear are also important. You want dark, fitted jeans that flatter your body – as always, avoid “dad jeans” at all costs. And unless you’re famous enough to be giving autographs instead of working for a living, leave the torn-up skinny jeans at home.

Can the Suit Jacket Ever Go With Jeans? 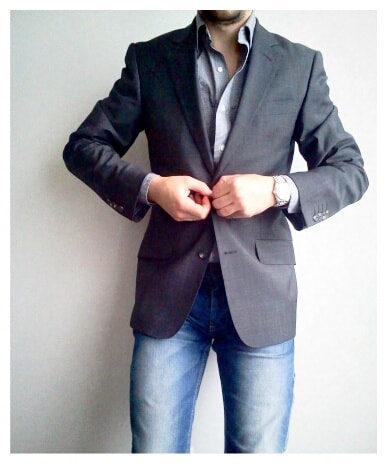 If, against my advice, you insist on trying the suit jacket with jeans, don’t “borrow” the suit jacket from your suit. It should be a standalone jacket that’s missing a pair of trousers – maybe something you salvaged out of a thrift store or from a friend.

Suits are meant for special occasions, and if go to wear it and the jacket is lying in a pile of clothes smelling like cigarettes because you wore it to a bachelor party last weekend, you’re going to regret it.

On top of that, wearing the jacket without the trousers can cause it to fade faster – especially considering that many causal events are held outside.

Your best bet is to find a suit jacket made from a unique material, like tweed, and switch out the buttons for something that jazzes it up a bit. This is much more easily passed off as a stand-alone item, which is really what you’re going for here.

Have you pulled off the sport coat with jeans look? Share your tips and tricks below.

Blue Pants with Black Shoes – When it works and when not

What shoes to wear with shorts? Three style ideas to rock your shorts

The Hottest Summer Beach Shirts For Men In 2016

Two Six Feet Under Actors Who’d Like The Show To Come...

How Disneyland’s New Parade Could Hint At Incredibles 2

Is It Ever OK To Wear Brown Shoes With Black Pants?

Understanding The Differences: Sport Coat vs Blazer vs Suit Jacket

Can You Pull Off The Suit Jacket/Sport Coat With Jeans Look?

ABOUT US
FOLLOW US
©
New Style Ideas Delivered To Your Inbox?
Leave your e-mail address and we'll send you new fashion tips and style ideas directly to your inbox.
Your information will never be shared or sold to a 3rd party. You can unsubscribe at any time.